This is the continuation of my first trip to Seoul. Read Seoul: Part One here.

There can be a fair amount of confusion when two people whose native languages are not the same converse. Even though Yongseok’s English is really strong, there were still times where we were not on the same page.

When we Skype-called our friend, Kate, on Sunday morning, she said, “Yongseok, sometimes when you laugh I think it’s because you don’t understand what I’m saying.” Kate tends to talk even faster than I do. Yongseok responded with a laugh. 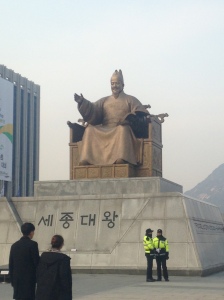 All of this to say that, when we passed the statues on the street that led to Gyeongbukgung Palace, and Yongseok told me that Yi Sun-Sin’s ship was a “cuttle” ship, I just smiled and nodded, and when I went to look up this guy’s name later on the internet, I realized Yongseok had been saying “turtle.” Turtle ship. Ooooooooh. Got it.

We also saw the statue of King Sejong, who created Hangul so that Koreans could express themselves beyond the limits of Chinese. He was an advocate for education and technological advancement and sponsored inventions like the rain gauge, sundial, water clock, celestial globes, and astronomical maps. 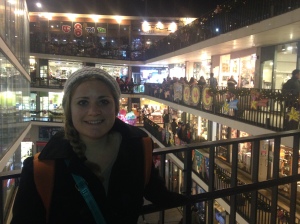 Throughout the day, we had stormed Gyeongbokgung Palace and Deoksu Palace, so it was late in the evening by the time we visited modern parts of Seoul. We ventured through Insadong, one of the shopping districts. There’s always so much to take in when shopping in Korea. Layers and layers of stores clustered together sell things you never thought you would need, but feel compelled to buy since it’s adorable and reasonably priced. The shops are not like those in Colorado, where everything is one level and spread miles apart. In Seoul, and Daegu for that matter, cafes are stacked on top of shops stacked on top of other shops. This first time in Seoul, I didn’t buy too much, but I did pick up a few souvenirs for my people back home (i.e. socks with Big Bang on them, because adorable and reasonably priced). 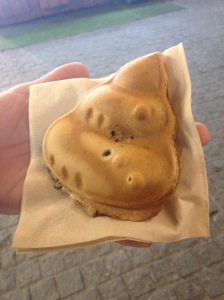 Insadong was also where I ate poop bread for the first time, or rather dong bang. Koreans have a fascination with poop that is lost to my Western mind, but the fried bread and chocolate, however unfortunately shaped, was quite delicious.

Taking pictures in a hanbok was probably the most unexpected thing I did during this trip. It took me a hot second to understand what was happening: What are we doing? We’re renting hanboks? Like, leaving the store with them? What? Oh, we’re taking pictures in them. That makes more sense. Do I put this on myself–okay, kamsamnida, I’m just a dumb foreigner who doesn’t know how to wear this thing. How many pictures do we take? What poses should we do? Um, obviously Charlie’s Angels pose??? Sure, also the double Korean peace-signs, of course. Wait, now we decorate the pictures on this computer? How does this work? Sure, I can put some flowers in the background. Make this as colorful as possible? Okay. Nice. 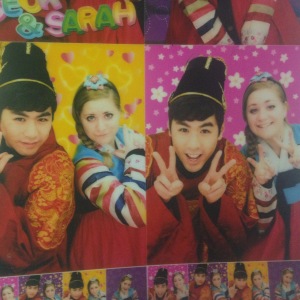 Lastly, we visited Seoul N(amsan) Tower. It loomed above us in glowing green light. There was a platform with a fence surrounding it that had thousands of locks all knotted together, symbolizing the love of visitors that came before us. Beyond this platform was a fantastic view of Seoul.

We arrived around 11:00 pm to Yongseok’s grandmother’s house in Gangnam.
She greeted me at the door and took my hand in hers, rubbing it gently. This is a welcoming Korean gesture. His mother was there, too, and she hugged me hello. They were very beautiful and sweet, these two women. Neither spoke English. 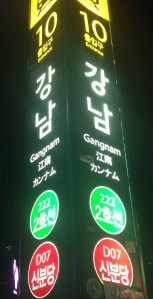 We sat at the dining room table and his mother fed us chocolate bread, a pretzel, and warm lemon tea. Yongseok translated back and forth. “She wants to hear more,” he told me after I had practiced a few words and phrases I had learned in Korean. I stumbled over a few more phrases I could think of to try to impress her.

We sat in the living room a while before bed. The big TV, exercise bike, and pictures of grandchildren that decorated the room reminded me of my own grandmother’s living room, and it made me think that all grandmother’s had similar taste in living room necessities. Yongseok’s grandmother made sure I had a toothbrush; Koreans are very dental hygiene-conscience. I soon went to bed, though, and somewhere in a neighboring apartment, an older, male Korean actor who’s name I can’t remember, also slept.

The last stop, before dinner and my return to Seoul Station to take the KTX to Daegu, was at a Korean Folk Village, where we spent most of the day. It reminded me of the colonial museums in the U.S. that I’d been to when I was a kid, where people dressed up and reenacted the lifestyle of that time period, washing clothes on a washboard, milking cows, shooting cannons in the town square. Except this was a Korean version.

There were huts and small buildings scattered beside dirt paths and had low ceilings and a variety of traditional Korean roofing styles. The ancient, rural feeling of the set-up was a stark contrast to the modern, energetic Korea that we know now. It was quiet with just a few people exploring the village, the rain soaking into the dirt path and our coats. 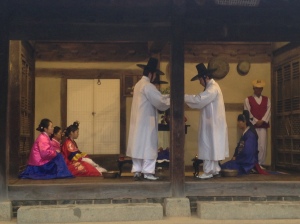 We stood under our umbrellas and watched the reenactment of a traditional wedding, the man clad in a blue handbok, the woman in a red one, bowing to each other. I wondered how many times this man and woman had pretended to marry each other, and whether they were actually married in real life, to each other or to other people.

This folk village has provided the setting for some historical dramas. It was the film location for Korean movies like The King and I (2007) and Jewel in the Palace (2003). I haven’t seen either of these, but it was interesting to see this aspect of Korean culture preserved. Even though the weather prevented us from seeing some of the other performances and events, we were able to see the village in quiet, a river flowing through with purple leaves covering the ground.

We left when it got dark, a hundred new pictures on my phone.